“Are you excited about being the first person to own a MODE LT?” Andrew Cooley asked Tammy Samsel and Marie Nakamura. It was Friday morning at a breakfast restaurant in Sacramento called Bacon & Butter. The Storyteller crew was the first to arrive that morning – we knew this was a popular restaurant and that a line would form out of the door soon.
Tammy considered the question that the co-founder of Storyteller Overland had just asked her. “I mean, I’m not so interested in being the first one. I just want ours.” Those sitting at the table erupted into laughter.
Today was June 24, the day that Tammy and Marie would finally pick up the first MODE LT ever sold by Storyteller Overland. It had been a 14-month wait, and they still felt like it was too good to be true.
“I still don’t know if it’s real,” Marie said. “I’ll probably feel excited when we get there and do a little dance or something.” 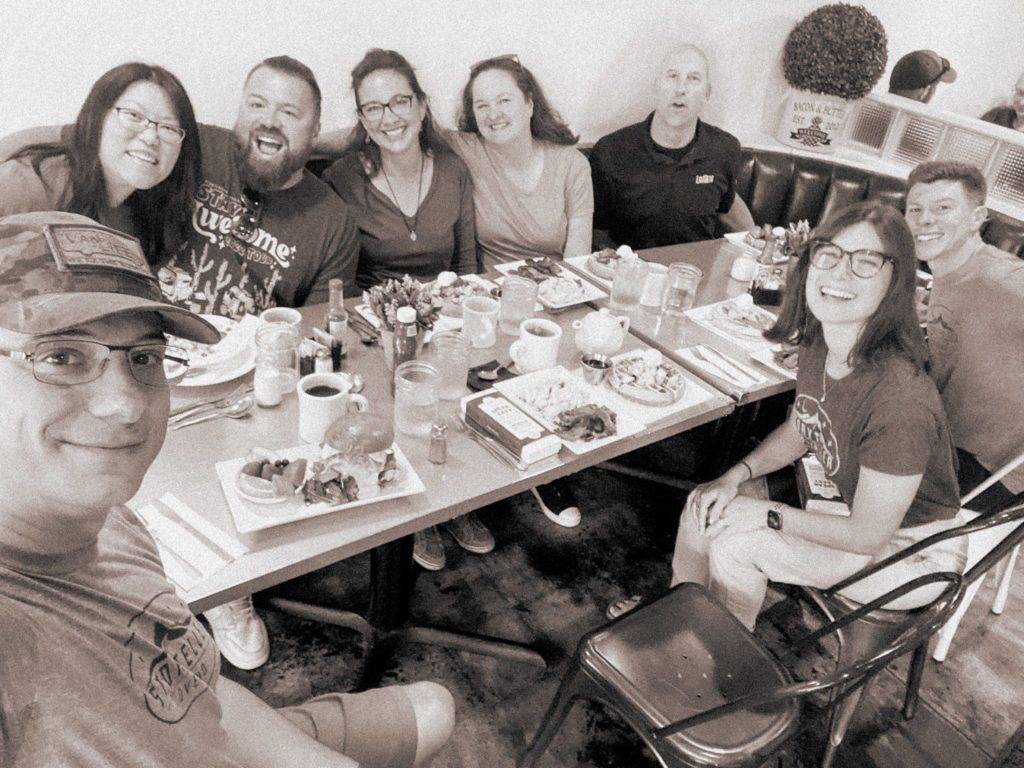 What does it take to become the first owner of a new model of an adventure van? For Tammy and Marie, it meant putting down a deposit three months before Storyteller Overland even announced the new model.

At this point, Chris Hastings at La Mesa RV in Sacramento had a good guess that the new model would be on the Ford chassis. But he wasn’t allowed to say anything to customers, so he called it the “mystery van.”

“Because of the long wait for a MODE 4×4, we started talking about the availability and what was coming,” he said. “I told them the possibility of coming in early and being an early adopter of the new model, and they were open to the idea.”

Then on July 4, 2021, they woke up at 4 a.m. in Hawaii in anticipation of the MODE LT announcement. The big reveal was planned for late morning, but Tammy and Marie were five hours behind central time.

“I was anxious,” Tammy said. “I wanted to know the details. You’re on the forums, and you know from everyone else that this is the big announcement.”

While Marie went on a run, Tammy set up her laptop on a chair and waited.

“We were quite frankly upset because we had done all of our research on the Mercedes,” Tammy said. “We were sold on Mercedes. We knew the good, the bad and the ugly.”

But after doing some research, they realized that the Ford was actually a better fit. Marie drives a sports car with red leather seats, so she was excited about the speed of the Ford’s engine. They also loved the idea of being able to travel and easily stop at a Ford dealership if they had any issues.

“California has a Mercedes-Benz dealership everywhere, but that’s not true all over the country,” Tammy said.

The icing on the cake was when Tammy met some Storyteller Overland influencers, The Russos and The Walsmiths, at an expo in Flagstaff. The Russos had been driving a prototype LT for their YouTube channel, and the Walsmiths were planning to sell their Classic for an LT.

“The Walsmiths were like, ‘We’re making the switch.’ And you know, they’re high-end users who are really particular and know so much more than newbies like us. That was really nice – they talked us off a ledge. I contacted Marie from Flagstaff and said, ‘We’re good.’”

The journey to their LT wasn’t easy, though, and their original delivery date was October 2021. It got to the point where their friends stopped asking about the progress because their responses were getting too cranky.

“It was so delayed that I didn’t want to tell anyone until it was really real. I finally posted on Facebook last night,” Tammy said at breakfast that Friday morning.

Throughout the past 14 months, Tammy and Marie said they’ve been watching countless YouTube videos and ordering products for their adventure van. It started with a French press coffee maker, and now they have an entire room’s worth of Amazon boxes that need to be unpacked and set up in their LT.

After breakfast, Tammy, Marie and the Storyteller crew rolled into La Mesa RV, which is one of the largest RV dealerships in the country. At the back of the dealership was an Arctic White MODE LT with a big red bow on the hood and gold balloons in the shapes of L and T.

Tammy and Marie began to clap and cheer as they got closer to their brand new adventure van. “It’s perfect,” Marie said after stepping into the galley.

Since gaining Tammy and Marie as customers, Chris Hastings has been promoted from salesman to sales manager. But supply chain shortages means he still has a couple dozen outstanding orders from Storyteller Overland, and a handful of those are LTs.

“It feels really good for a customer to believe in a product, a salesperson, a company so much where they can wait it out,” Chris said. “We were all waiting together. There’s no separation between the salesperson and the customer when it’s a brand new product being unveiled and delivered.” 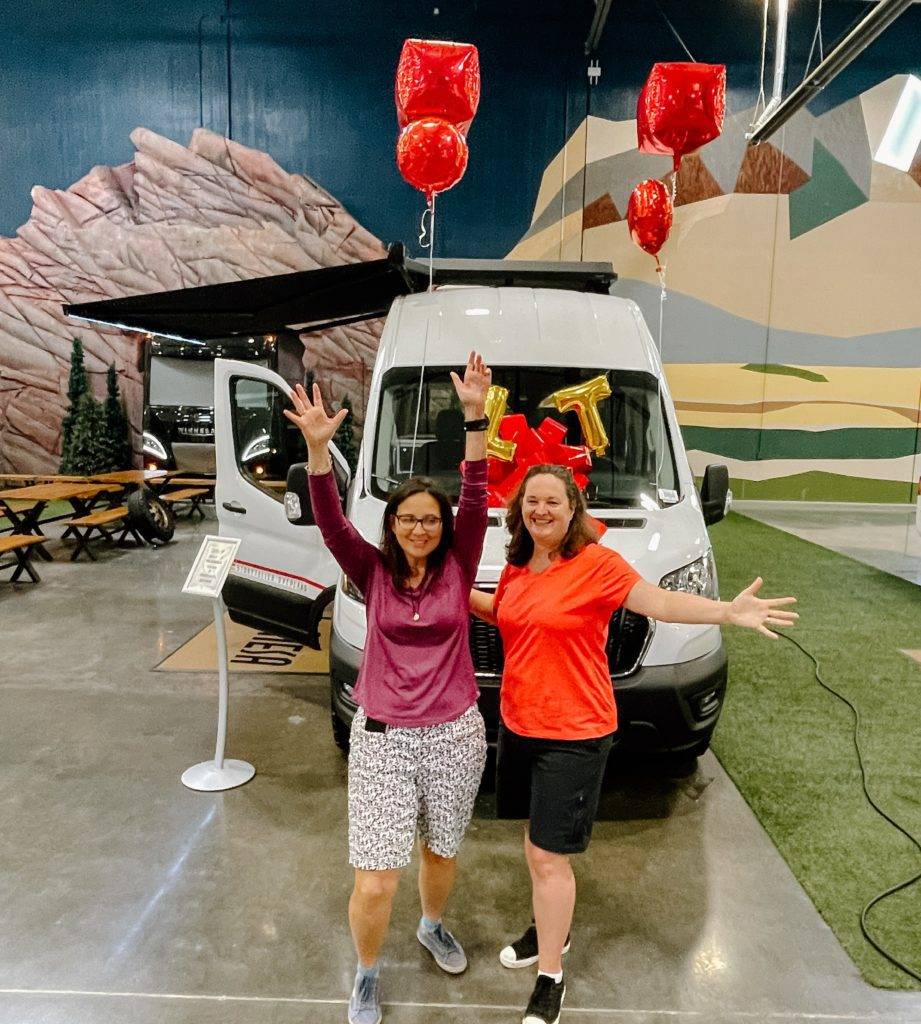 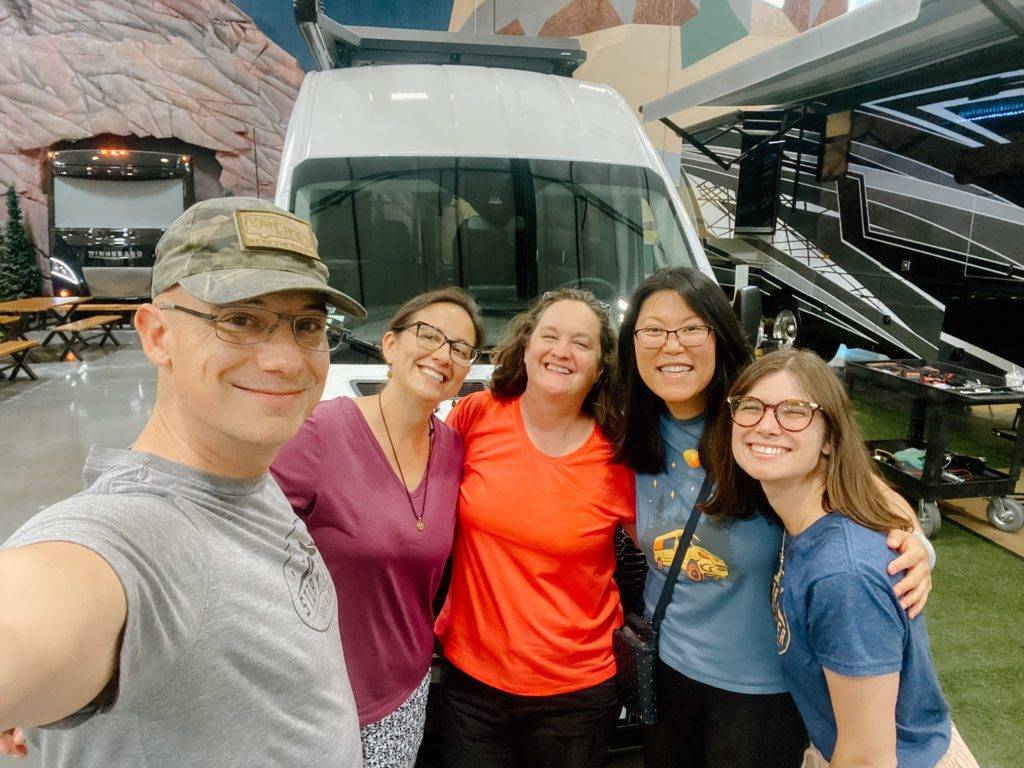 It’s been a long journey – much longer than any of us at Storyteller could have ever anticipated. We’re so excited that Tammy and Marie were able to drive home in their new MODE LT, and we can’t wait to hear all the stories they’ll tell.

Thank you for being a community that faces challenges with us and patiently awaits for the next big thing. We hope to see many LTs on the road some day!

Cheers to the road ahead,